Posted by François Daudelin on December 1, 2018 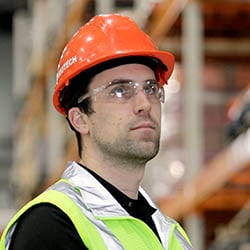 Find me on:
LinkedIn

Load Application and Rack Configuration (LARC) drawings are documents required by OSHA, however many warehouse operators don’t have them on-hand. North American standards require that pallet rack owners display the load capacity limits of their rack systems and have up-to-date drawings made available to health and safety officials when they visit.

Pallet racks are optimized steel structures designed to maximize the amount of storage area by stacking goods on multiple levels. Most rack components are made by cold-forming sheet metal less than 1/8 inch (3 mm) thick into a desired shape or form. Consequently, it is imperative to know how much weight they can support to avoid overloading them.

A typical pallet rack compartment or cell can hold two pallets, each weighing 2,000 lbs., on a pair of beams, for a total of 4,000 lbs. To put this weight into perspective, it is similar to storing a Ford F150 pickup truck. Now imagine having a warehouse filled to the roof with such goods. It’s imperative to understand the relationship between what is stored and how much can be stored in the racks. How is one supposed to know if the racking system can hold the load? This is where the LARCs come in handy.

Pallet racking load limits are limited by either the beams or the upright’s frame. It all depends on which part has the lowest load rating. For conventional systems, each upright frame bears half of the loads carried on each pair of beams that are attached. The cumulated beam loads are the vertical load applied to the upright frame.

The illustration below is an example of an altered system where the fourth upright is overloaded and limiting the load on either side. For instance, the upright frame capacity is 24,000 lbs., the beams’ capacity is 5,000 lbs., and it is possible to store two pallets per cell (no beams are overloaded). 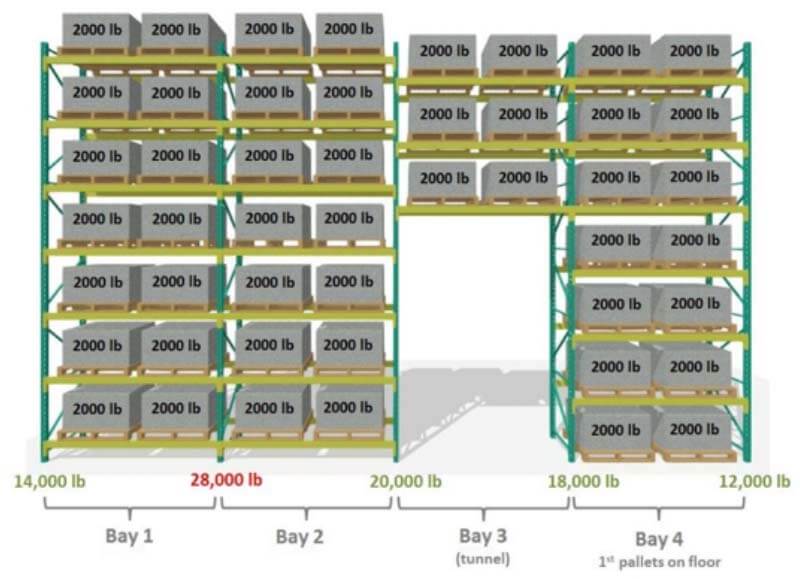 Since pallet racks are manufactured for adjustability and easy assembly, some warehouse operators and owners may think that an existing pallet rack can be reconfigured at will, for instance by moving beam levels to accommodate new storage needs. However, such a change in beam level is not without consequence as it can directly impact pallet racking load limits. In fact, they should be certified by a qualified engineer, documented with the LARC drawings and kept on hand for consultation.

Warehouses have been operated conventionally for a long time. Labor workers have had to physically handle products from... END_OF_DOCUMENT_TOKEN_TO_BE_REPLACED
#Pallet Racks  #Blog  #Warehouse Safety  #Statistics

In the supply chain and warehousing industry, some days may feel like a balancing act as many warehouse managers must... END_OF_DOCUMENT_TOKEN_TO_BE_REPLACED
#Pallet Racks  #Blog  #Warehouse Safety

5 Essential Rack Safety Tools to Help You Succeed in 2021

As we wind down from this incredibly unusual year, anything that can make running a safe warehouse a little easier and... END_OF_DOCUMENT_TOKEN_TO_BE_REPLACED